On Saturday the 21st of July, a coalition of militant anti-fascists came together to oppose the Scottish Defence League in Glasgow. This is an account of the day’s events.

The so called “Scottish Defence League” (SDL), related to their equally bigoted English cousins in the “English Defence League”, have been in steady decline for years after consistent opposition from militant antifascists. Their latest demonstration called in Glasgow for July 21st was one of their latest attempts to desperately claw back their lost vitality by unifying assorted racists, fascists, Nazis and right wing sympathisers behind their banners, complete with MS Paint graphics. Groups like the SDL have seen a recent influx of support thanks to an international resurgence of the far right, particularly in the states and mainland Europe. Their numbers have also been bolstered more recently by the disenfranchised dregs of banned neo-Nazi youth groups such as those from National Action, Scottish Dawn and obscure splinter factions such as the Scottish Nationalist Society (SNS). The SDL act as a sort of catch-all banner under which more radical extreme right groups can flock to access a larger recruiting and support pool.

Their supposed message this time was outrage at the child grooming gangs that have been operating in Glasgow and have come to public attention recently. The irony of this being of course, that the SDL and the various groups they are in league with (EDL, North East Infidels etc) have a proven history of being riddled with child groomers, paedophiles, abusers and sex offenders and have absolutely no leg to stand on when it comes to challenging these behaviours outside their group. This is of course, as with all their previous manufactured outrages and demonstrations, a thinly veiled disguise through which they can attack the non-white, especially asian/middle eastern and north African community in Glasgow and gain legitimacy by re framing their racism as concern for children. Won’t somebody please think of the children? It won’t be the SDL doing it, that’s for sure.

Unfortunately for both the SDL and their pals at Police Scotland, ever ready to ensure a safe platform for Fascists and bigots, this demonstration was not going to go unanswered. Thanks to a last minute, spontaneous mass call out by a range of militant antifascists and firms, opposition to the demonstration outside of the turgid and predictable response from Unite against Fascism (a well known front of the disgraced Socialist Workers Party obsessed with placard waving and ineffective, civil protest) was ensured. The sudden flood of organising and online response to the demonstration no doubt spooked Police Scotland into imposing very harsh and restrictive conditions on the SDL demonstration (as published by the Herald here), making a police escort mandatory, limiting their attendance to 100 people and their demonstration time to 30 minutes. Before any boots had hit the ground on the day, pressure from antifascists ensured a disproportionate police response which severely hampered the SDL from organising. Interestingly, presumably not to look weak, the SDL failed to let anyone know about the conditions placed on their little tantrum session until the demo was already happening. Maybe they were worried nobody would come if they knew how pathetic it was likely to be?

On the day of the demo itself, it was clear the Police had invested massive amounts of resources in totally clamping down on any dissent outside of the official counter demonstration; the central area of George Square was completely fenced off in anticipation of the European Championships, traffic was restricted, the perimeter of the square and all the entrances to queen street station were crawling with cops, at various parts of the square numerous riot-vans lurked and mounted police, dog units and riot cops (not to mention a helicopter!) were all brought in to attempt to clamp down totally on any mass organised antifascists determined to do more than chant. The Police budget for the day must have been enormous. 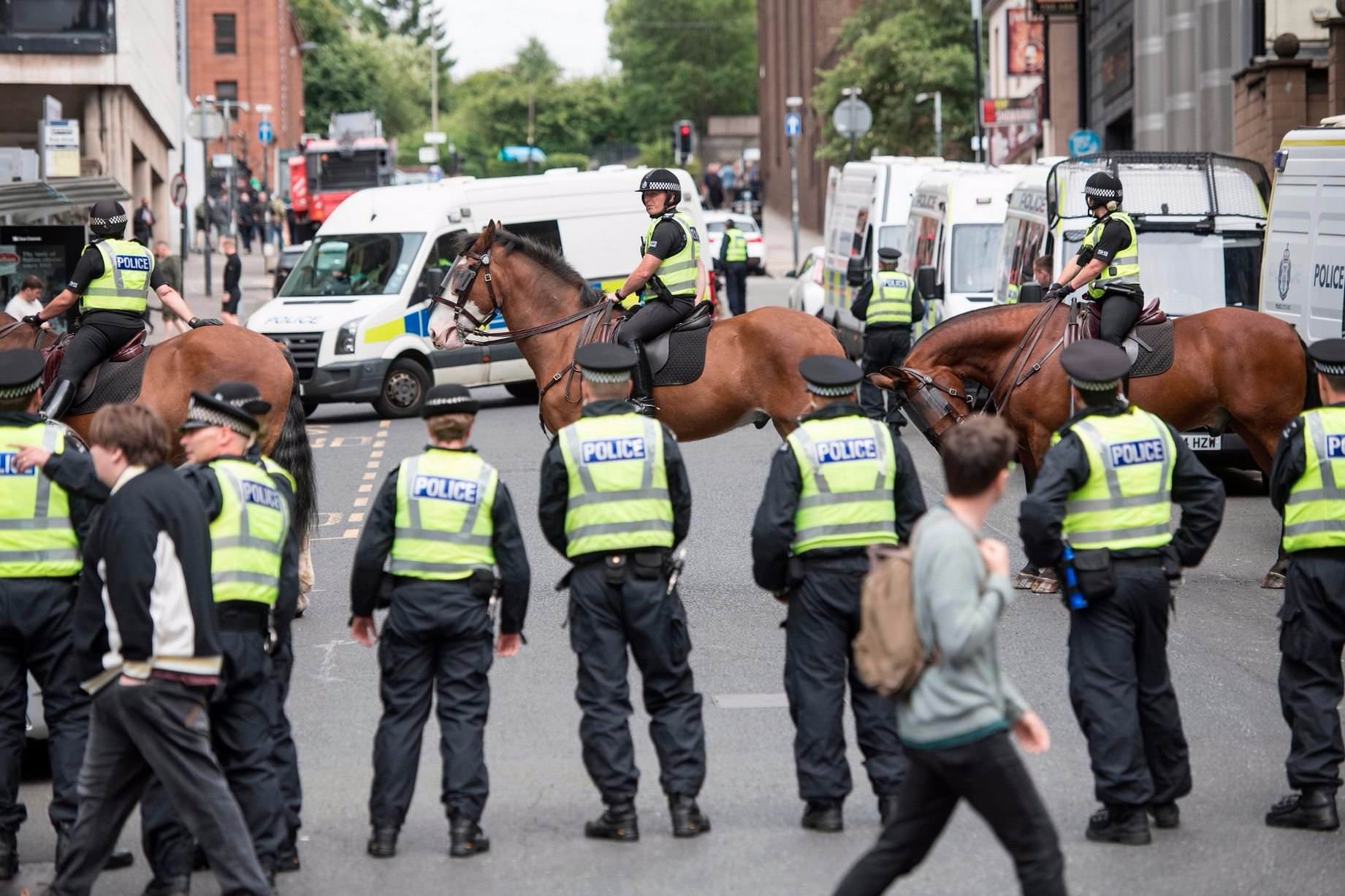 While the main UAF demonstration went as boringly as predicted, the Police made a key error in failing to block off the rear approach to the SDL muster point shortly before shepherding the Fascists into their play-pen. This was a vulnerability a spontaneously formed black-bloc of around 80-100 militant antifascists from a variety of groups and firms spontaneously exploited, by charging the still mustering SDL from their unprotected rear, hurling smoke and noise bombs and coming incredibly close to connecting with their tiny number of “activists”. The police, forced to react, narrowly saw off the antifascist charge with a baton charge of their own and proceeded to spend the next few hours chasing off the incredibly mobile bloc around the city, every time it attempted to find an alternative route to intercept the SDL. Although the bloc didn’t make it through police lines and suffered several kettles and arrests, this show of force demonstrated it was the antifascists with the numbers and political force on the day to smash their opposition, who cowered behind their police babysitters, unwilling and unable to bring the fight to the organised left opposition. After half an hour of unearned self-congratulatory and confused speeches, the SDL were escorted off to Queen street station and unceremoniously whisked away by a worried Police Force.

With the main demonstration concluded, all that remained was for antifascists to mop up the stragglers who were chased around town. Several SDL were cornered and severely spoken with, one ran away to hide in a local shop, narrowly avoiding a heated exchange of ideas and instead cowering behind their shutters as befits the master race. New kids on the block, Nazi schoolboys “Scottish Nationalists Society” aka National Action leftovers, learned their lesson the hard way when their flags and stickers were confiscated by antifascists on their way out (Thanks SNS, burning video to follow!).

All in all, the day was largely a success. A strong call out beforehand forced the hands of the Police and Fascists, hampering them throughout the day. Militant antifascists strongly outnumbered the far right even excluding the UAF demonstration, representing a victory in collaboration between radical groups across Scotland, united to combat the far right. Although militant antifascists failed to connect with the far right during the demonstration proper, the runts of their litter were soundly chased off and dissuaded from returning afterwards, with captured fascist trophies solidly in the hands of antifascists. While we should not wait for the state and police to suppress fascists (history tells us they won’t), the disproportionate response to the threat of opposition to the SDL caused a massive expenditure of resources on the part of the Police, who were barely able to contain a sizeable bloc. This will mean that Police will be less keen to play along with the far right in future and will stretch their resources to breaking point should the antifascist movement make further strides in growing the movement, keeping it radical and organising as a coherent response.

Although not a complete victory in that the SDL managed to hold a demonstration at all, Saturday saw radical antifascists take the upper hand and keep it. These successes and lessons will be carried forwards and will go on to help make future responses even stronger and more successful!